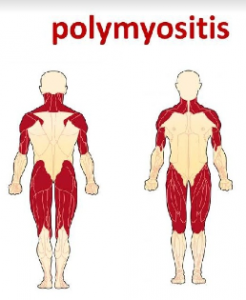 2. Infection. Viral infections are the most common infections causing myositis. Rarely, bacteria, fungi, or other organisms can cause myositis as well.

3. Drugs. Many different medications and drugs can cause temporary muscle damage. Because inflammation in the muscles is often not identified, the muscle problem may be called myopathy rather than myositis. Drugs causing myositis or myopathy include:
• Statins
• Colchicine
• Plaquenil (hydroxychloroquine)
• Alpha-interferon
• Cocaine
• Alcohol
4. Injury. Vigorous exercise can lead to muscle pain, swelling, and weakness for hours or days after a workout.

Rhabdomyolysis occurs when muscles break down quickly. Muscle pain, weakness, and swelling are symptoms of rhabdomyolysis. Urine may also turn a dark brown or red color.

Myositis treatment varies according to the cause.
Inflammatory conditions causing myositis may require treatment with drugs that suppress the immune system, including:
• Glucocorticoids
• Methotrexate
• other Immunosuppressive drugs like azathioprine, Mycophenolate, cyclophosphamide, rituximab etc.
Myositis caused by infection is usually due to a virus, and no specific treatment is necessary. Myositis caused by bacteria is uncommon and usually requires antibiotics to prevent life-threatening spread of the infection.
Although rhabdomyolysis rarely results from myositis, it can cause permanent kidney damage. People with rhabdomyolysis are hospitalized in order to receive continuous intravenous fluids in large amounts.
Myositis related to a drug is treated by stopping the medication. In cases of myositis caused by statin drugs, muscle inflammation usually subsides within a few weeks after stopping the medicine.