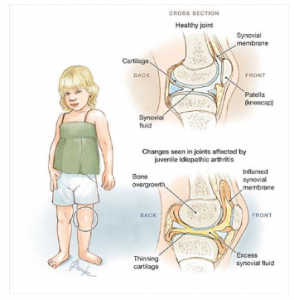 Juvenile idiopathic arthritis, formerly known as juvenile rheumatoid arthritis, is the most common type of arthritis in children under the age of 16.

Juvenile idiopathic arthritis can cause persistent joint pain, swelling and stiffness. Some children may experience symptoms for only a few months, while others have symptoms for the rest of their lives.

• Pain. While your child might not complain of joint pain, you may notice that he or she limps — especially first thing in the morning or after a nap.

• Swelling. Joint swelling is common but is often first noticed in larger joints such as the knee.

• Stiffness. You might notice that your child appears clumsier than usual, particularly in the morning or after naps.

Juvenile idiopathic arthritis can affect one joint or multiple joints.

• Eye problems. Some forms can cause eye inflammation (uveitis). If this condition is left untreated, it may result in cataracts, glaucoma and even blindness.

Treatment for juvenile idiopathic arthritis focuses on helping your child maintain a normal level of physical and social activity.

• Disease-modifying antirheumatic drugs (DMARDs). Doctors use these medications when NSAIDs alone fail to relieve symptoms .. The most commonly used DMARD for children is methotrexate .

• Corticosteroids. Medications such as prednisone may be used to control symptoms until another medication takes effect.

3. Surgery : In very severe cases, surgery may be needed to improve the position of a joint.